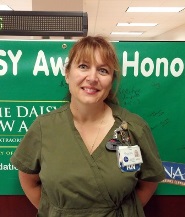 Neuro/Surgical
UF Health
Gainesville
,
FL
United States
A 35 year-old patient, Mr. B, with a long history of brain cancer recently died on unit 11-5. All of the 11-5 staff had grown very close to this patient and his family, considering his long history with the Neurosurgery service and his multiple hospital stays. This close relationship is actually the reason why the family chose to keep him in the hospital during his last days of life and specifically requested that he die on 11-5 rather than in a Hospice setting.

Mr. B's wife brought in wrist bands which read "Team B" that all the staff wore in support of his fight with cancer. They have 3 children, a toddler and two adolescent boys. When the two boys, age 12 and 14 were told of the patient's terminal condition and imminent death, they were very distraught. While the charge nurse and family members tried to console them, they sought additional words of encouragement and brought them to the Nurse Manager, Justine Abram's office. Justine immediately dropped what she was doing and spent the next few hours talking to them and crying with them. From that moment on, the boys always looked to Justine for comfort. Whether it was just to sit in the patient's room with them during a visit, or answer questions about the death process and what happens, Justine helped them through it. She dropped whatever she was doing to be present with the patient and his family.

Truly, all of the nursing staff were really involved with this patient's care and ensured the wants and needs for both him and his family were met during this difficult time. Ensuring his dog was there at the time of his passing was one such request that the staff was able to meet. Many people sat with them, just to be present, shared stories and memories, and many tears. The act of being present, not hurried, and allowing someone to feel as if they are the only thing that matters is a true gift. Justine and her staff provided this gift to this patient and family.

On the night of his passing, his sons, as usual, looked to Justine for support. As his last moments were late at night, Justine was not in the hospital. The nursing staff, however, called Justine at home and she immediately dropped what she was doing to be present with the boys. Justine, along with a day shift PCA, Ruth Dorsey, stayed here that night until 3am and helped with the care of Mr. B and comforted the family during this difficult time. Justine helped answer many difficult questions that the boys had, such as where the body goes from here and what happens next. The entire nursing staff on unit 11-5 truly showed compassionate, patient-centered care to this patient and family during this difficult time; and as a Nurse Manager, Justine truly exhibits what a great leader is and what it means to put the patient first.
Justine
, view your benefits
Print
Justine
's Spotlight