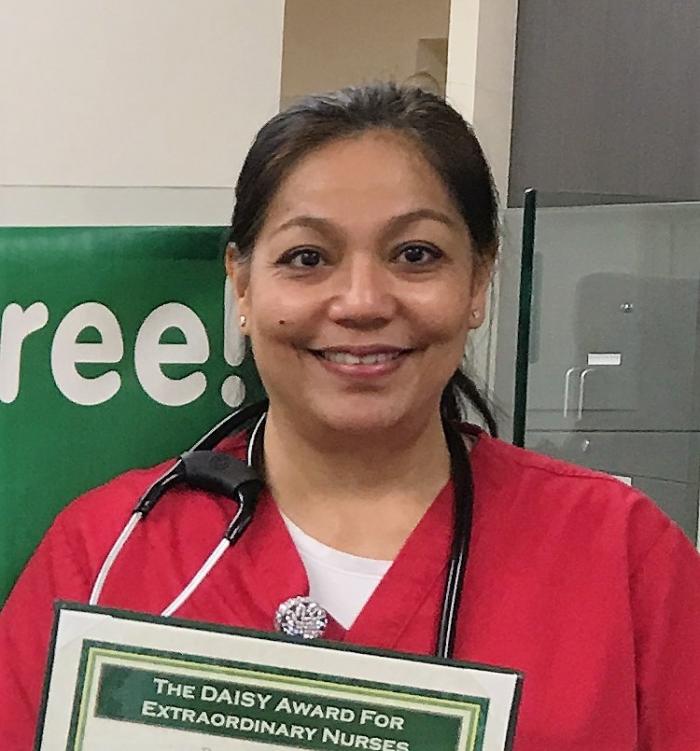 Maternal Child Health
Kaiser Permanente Woodland Hills Medical Center
Woodland Hills
,
CA
United States
Ask any nurse or doctor and they will tell you that there's nothing more difficult than having to care for an ill child. Children, unlike adults, don't always understand nor see the necessity in their treatments. Of the numerous patients Regina has had, one young three-year-old girl struck a chord with her and, to this day, she still holds a flame in her heart for her. Regina remembers their first meeting, and like any typical meeting she has had with patients of that age, it was filled with distrust, uncertainty, and anxiety. This patient entered the unit bewildered and frightened. More importantly, she entered the unit without an IV. Placing an IV into any patient has its challenges, but on children it can be more than challenging. Upon Regina's quick assessment she knew she was in for a bout of high pitched screams and tears, thus she decided to turn her attention to this patient's worried parents first. Like many parents they were filled with concern and countless questions. From their eyes, Regina could tell that the news of their daughter's diagnosis had yet to sink in. Without overwhelming them much more, she informed them of the plan of care and answered their questions. Before returning to their daughter, she made it clear to them that she would need their help in ensuring a painless experience for their daughter. For the next five minutes, short as it might seem but feeling eternally longer, Regina, together with the parents and her co-nurses, worked to place an IV. Regina's heart ached as this little girl cried and writhed in pain, but she needed that IV if she was to make her way to recovery. By the end of the shift, Regina was able to help the family settle into their temporary home. That moment of their first meeting marked the beginning of their two-year journey together, because alongside this patient, her parents were Regina's patients too.
This family and this patient truly left a handprint on Regina's heart. She was a young girl filled with so much character that it was impossible not to love her. She was energetic, vibrant, intelligent, and a light to the staff's lives. Like any child, she was playful and comical, but inside she was courageous and inquisitive. Regina's days working as her nurse were filled with her endless chatter and nonstop questions. For example, prior to starting an infusion she would bombard Regina with a series of questions and unless she answered honestly and clearly she wouldn't stop. She was so opinionated that often Regina hypothesized that she was a wise old woman disguised in the body of a child, sent on a mission to set everyone straight. God forbid you didn't fulfill a promise made to her, because she would call you out right; using the call light to aid her in her pursuit of justice. Despite her very young age, however, she had a comprehension that was beyond her years. On one occasion, she illustrated with a drawing her understanding of the cancer she suffered from. Her picture was detailed, outlining how her cancer spread, proving she was well beyond her years. To this day, her picture remains displayed in 3 South unit, forever looked upon with love and affection. More than anything, she had the most joyous presence. Regardless of her own personal struggles, she continued to smile and draw out the best from anyone. During one of her lengthy stays, she came up to one of the doctors, who was very reserved and quiet, and boldly placed a sticker on his hands. From that moment it was as if she had awoken him from a spell; this doctor became animated and talkative, and ever since then, was more interactive with the staff. She was an amazing child that became a source of light in the unit. She and her family permanently worked their way into everyone's hearts and became family. She needed caring with firmness, sensitivity, and compassion and everyone worked together to provide it.
At five-years-old, her journey sadly came to an end and she passed on peacefully. On the day of her funeral, her parents allowed each guest to take a toy of hers in memory. Regina chose a singing teapot that she played with frequently. It reminded Regina of the times she would adamantly refuse to take her oral medications and the only way Regina got her to do it was by playing tea party with her, complete with a British accent. Regina remembers her smiles and giggles that would follow as she persuaded her to take her medications. Of course, being the bright child she was she caught on eventually, but by then she understood the importance of the task and bravely endured it. Her teapot is a fixture in Regina's home, a loving reminder of why she does what she does and why she cares. Yes, as nurses we do care and treat our patients, but many times it takes encountering a patient such as her to remind us of the impact our patients can have on our own lives.
Regina
, view your benefits
Print
Regina
's Spotlight